FG: Particle Heating and Thermalization in Collisionless Shocks in the MMS Era

From gem
Jump to navigation Jump to search

Introduction to the focus group

The major focus of the Focus Group is particle heating and thermalization processes in collisionless shocks at kinetic scales, through the Earth’s bow shock and interplanetary shock observations and modern numerical simulations. Understanding and modeling these fundamental processes are essential to modeling geospace as the bow shock controls the solar wind input into the magnetosphere. The proposed FG will primarily build on the synergy of the unprecedented observation and modeling capabilities that have only come into effect in the past few years. 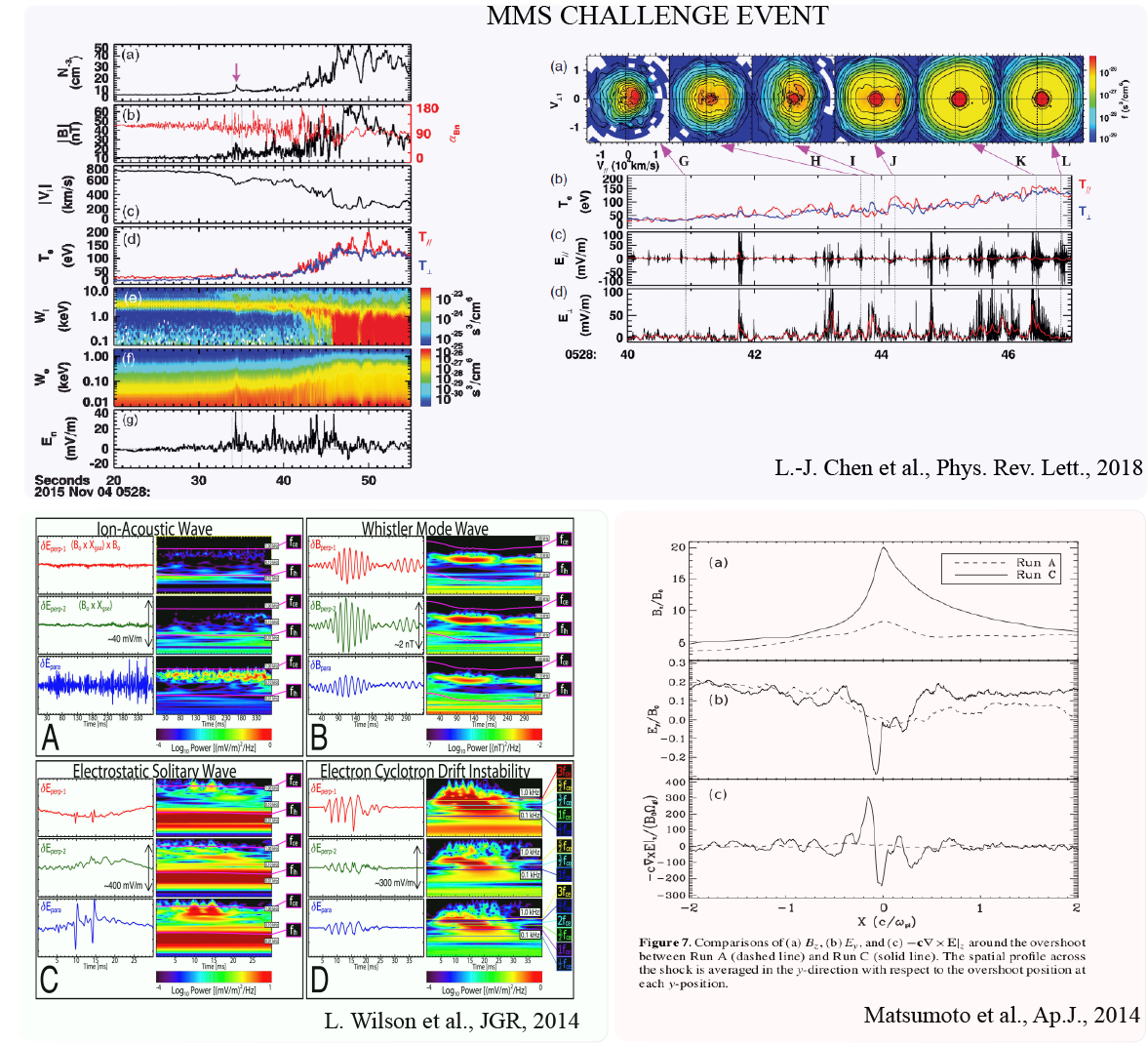 Figure 1 The two upper panels present the Earth’s bow shock crossing by MMS presented by Chen et al., PRL, 2018 that is selected as a challenge event for the FG during the first year. Panels (a)-(f) in the left figure show the standard behavior of various quantities across the shock - density and magnetic field increase, ion bulk velocity decrease, electron parallel and perpendicular temperature growth resolved with the high temporal resolution by the FPI instrument, electron and ion spectra with unprecedented time resolution. Panel (g) presents the quasi-static electric field along the normal to the shock and indicates that this electric field may consist of high-amplitude short-scale electric field spikes associated with noticeable particle heating as seen in the spectra. The right figure shows the evolution of 30 ms time resolution electron distribution function across the ramp of the bow shock and associated high-frequency waves. The role of quasi-static vs. high-frequency large-amplitude electric field fluctuations in particle heating and thermalization is the fundamental question to be addressed in the frame of the FG. The bottom left panel from Wilson et al., JGR, 2014 (THEMIS observations) shows that the high-frequency wave activity in collisionless shocks may consists of different waves (ion-acoustic waves, Bernstein modes, solitary waves and whistler waves). The mechanisms of their generation and role in particle heating and thermalization remain unresolved and represent another objective of the FG. The bottom right figure shows the results of modern PIC simulations (Matsumoto et al., ApJ, 2012) of a collisionless shock. The important point is that the current simulations do not reproduce the realistic amplitudes and profiles of both the quasi-static electric field and high-frequency waves/structures observed in the Earth’s bow shock.

The broad goal of the Focus Group is to: